Benchmark client Tito Murphy’s is a Latin restaurant in Hell’s Kitchen, on Restaurant Row by the Theater District. As we roll into Hispanic Heritage Month and chillier months, their heated street cafe and heated rooftop patio will keep us warm to take in the neighborhood ambience.

The Hell’s Kitchen neighborhood was traditionally an Irish neighborhood. The origin of the name is disputed, but in 1835 Davy Crockett reprehensibly commented about a different Irish NYC neighborhood, “In my part of the country, when you meet an Irishman, you find a first-rate gentleman; but these are worse than savages; they are too mean to swab hell’s kitchen.” Later, the area became known for the apartments where actors lived, striving to get a foothold in the industry. Definitely — Tito Murphy’s location makes it an ideal dinner spot for a night at the theaters a few blocks away. These days, a vibrant LGBTQ community thrives through the colorful venues of Hell’s Kitchen, including Tito Murphy’s, who has two weekly drag shows.

Benchmark prints A-frame signs and window clings for Tito Murphy’s shows, their business cards, and a 10-inch hi-tack label of their logo for their awning. 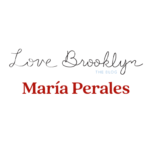 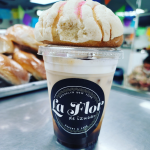 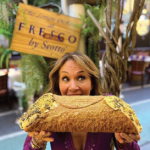